Aeroccino 3 vs. 4 – Which Nespresso Frother To Buy?

Nespresso’s Aeroccino milk frother is usually an add-on with many of their espresso machines like CitiZ, Pixie or Inissia. But it’s also available to buy individually. It’s an easy way to heat and prepare froth for any coffee drink recipe with a push of a button.

There are several models to the Aeroccino milk frother:

Since Aeroccino Plus is no longer available, we will compare the two available models, Aeroccino 3 vs. 4.

Let’s start with the features of Aeroccino 3:

Click here to learn more about Aeroccino 3, read the customer reviews and buy it.

Click here to learn more about Aeroccino 4, read the customer reviews and buy it.

How Are They Different?

Nespresso Aeroccino Compared To Other Brands:

Breville’s Milk Cafe  is a personal favorite. Like everything else Breville does, this appliance excels at what it’s supposed to do. It has many features that we’re yet to see in a milk frother from other brands:

Click here to learn more about the Breville Milk Cafe, read the customer reviews and buy it.

The Secura Frother is a great budget friendly choice for a milk frother:

This model is more comparable to the Aeroccino 3 and nearly has the same features but at a more accessible price.

Click here to learn more about Secura Milk Frother, read the customer reviews and buy it.

Here’s Why You Should Buy Breville’s Milk Cafe Frother Over Others….

When comparing the Breville Milk Frother to other frothers on the market, it’s is the most high end, even compared to Nespresso’s Aeroccino. And that is reflected in its price, it is the most expensive among them.

So you wonder, is the Breville Milk Frother worth the extra money, if yes, then why?

Watch How It Works:

– What’s Included with the Breville Milk Frother?
You get the frother, 2 frothing discs with onboard storage, a lid with a measuring cup.

– Can It Be Use To Heat Milk Without Frother?
Yes, it can heat milk only.

– Can I Use The Breville Milk Frother For Iced Drinks?
Yes, simply choose the the cold stir option which will lightly froth your milk without heating it.

– What Is The Best Milk To Froth with The Breville Frother?
With any frother, the rule is, the less fat in the milk the better froth you’ll get. So skimmed, 2% will get you the best froth, full-fat milk works great too. Then we have the alternatives, Soy works, but doesn’t give the best froth, while Almond milk should work better.

– What Are The Frother Discs Made of ?
They’re made of BPA-free plastic.

Which Milk Is Best To Use For Cappuccino Froth?

Whether you’ve got an espresso machine with an integrated frother or use an electric milk frother, the quality of froth made relies a lot on what type of milk you use. So which type of milk makes the best froth for a Cappuccino?

What this video for a quick comparison:

The machine used in the video above is the Gaggia Brera Superautomatic espresso machine.

Which Milk Is Best For Cappuccino Froth?

As you’ve seen in the video:

– Whole and Skim milk seem to produce the best and most consistent froth.

– Soy milk comes last. While it does froth, it seems to come down rather quickly.

Ultimately, what type of milk you use is completely up to you and your taste buds. But if you’re expecting great froth, we highly recommend that you use either skim or whole milk. 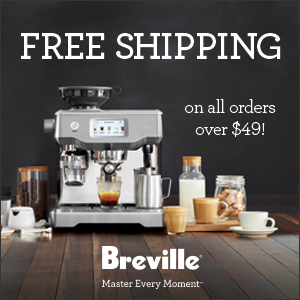